As a matter of fact you might say he is the only conservative in the race for US Senate in Oklahoma.

Several weeks ago, grassroots leaders got together in Oklahoma to tell you why we are not supporting TW Shannon for US Senate. This occurred in response to some ‘national teaparty’ leaders who made a swing through the state telling us he was our man. Our letter letting them know about the error of their ways is entitled why Oklahoma Grassroots Leaders and Activists Do Not Support TW Shannon and it is here >>>

Then there are those telling us why James Lankford deserves a promotion including via his own TV ads touting his ‘conservatism’; that is until you look at his voting record which is in and of itself rather dismal. I shared with you his bad votes recently on FGST here >>>

So now it seems only fitting to let you know that there is a real conservative leader on the ballot in the primary. The media is trying to ignore him and even excluding him from some events (so what else is new right?!), but the people know that he has been there for us on so many fronts in so many battles over recent years. He’s the kind of man who is there at crunch time for you and not all focused on taking credit for all the hard work of so many people in the matter when the job is done! However you know that he was there early on and when it mattered – like for instance with the repeal of Common Core recently. Now that is a leader and one that we will not have to lobby all the time to get to do the right thing! 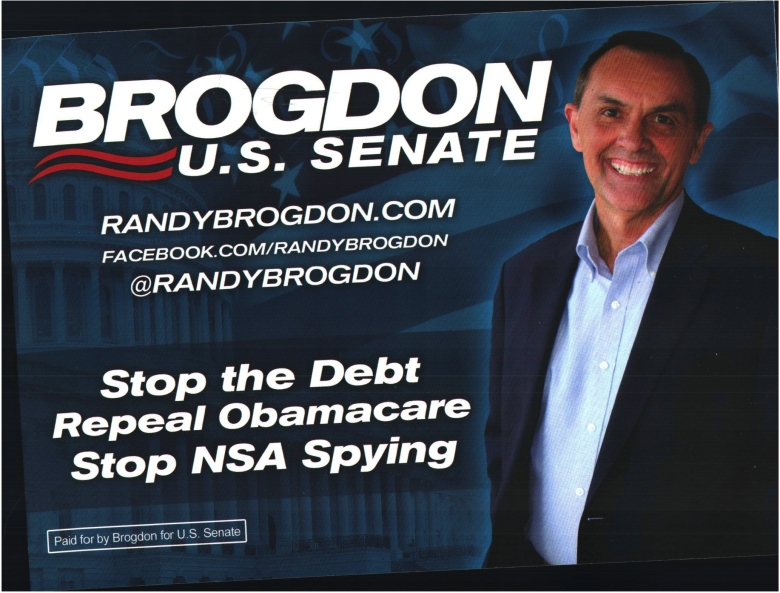 “Be leery of politicians that will promise you the world.  My Campaign Promise:  I will tell you the truth. 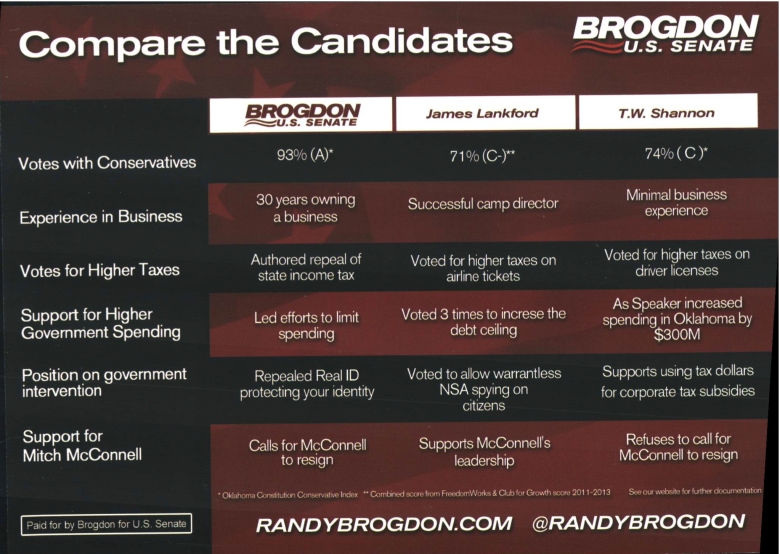 Comparison piece with startling differences between the top three candidates.

But then of course I must also point out the differences in support for higher spending.  Lankford voted 3 times to raise the debt ceiling.  That does it for me – how about you?  Real ID anyone?  Support for Mitch McConnell?

Looks to me like the choice is clear – Randy Brogdon for US Senate.  I believe he can take it without a run-off  if only people look at the record and the money trail.  Will you help me tell the story and get out the word in your precinct?  Primary elections are about voting for the best candidate.  Run-offs will be held if necessary.  This one is a no brainer as far as I am concerned!

Here is my flyer of my favorites candidates in my area >>>

The Conservative Champion in Oklahoma for US Senate is Randy Brogdon

Primary Elections are about electing the best person for the office. In the general you can pick the lesser of two bad choices if you don’t get someone who walks the talk through the primary options… Happy campaigning out there! Don’t forget to have fun and make friends while you are on the campaign trail. ‪#‎R3s‬ ‪#‎4life‬ ‪#‎4liberty‬

So everyone is a conservative now.  And oddly enough everyone is for liberty now.  Hmmmm.  Who are the real champions?  They are the ones who were there before it was cool.  Leading the way.  Standing on principle.

State Legislator of the Year- The Oklahoma Constitution Newsapaper

Defeated NAFTA Superhighway -Protecting the Property of Oklahomans from Confiscation

Note:  The legislation above was achieved under a Democrat Governor