Amid fallen trees and debris, chainsaw ministry carves out hope and faith with each cut

A disaster relief team from Oklahoma is helping residents whose homes are threatened by trees or those that are looking a bit precarious. Before a single cut is made though, it’s hats off and hand-in-hand for prayer.

Read more and see video via source: Amid fallen trees and debris, chainsaw ministry carves out hope and faith with each cut

summary via Finding Gems & Sharing Them

We are going to have our Washington County Grassroots Prayer Team monthly meetings on the first Tuesday of the month for the next few meetings, so plan ahead!

Speaker:  Julie Daniels
Julie Daniels is a candidate for Oklahoma Senate Seat District 29. Senator John Ford currently occupies this seat but is termed out. Julie is also a former Mayor of Bartlesville.  Many of you know her well, but we will all learn more about Julie Daniels and her thoughts on issues facing our state, county and city. We will have plenty of time for Q&A and then time for prayer at the end.  Please come join in the discussion. You will enjoy getting to know Julie and hear from her and ask questions too!
We will hopefully get an update on her campaign as well. Hope to see you next Tuesday night!
_____________________
Scripture to consider: Matthew 6:10

your will be done,

on earth as it is in heaven.

I am suggesting we Pray Matthew 6:10 over our city replacing the word “earth” with Bartlesville —  “Your kingdom come, your will be done, in Bartlesville as it is in heaven”.
Bring your questions & friends and make plans to attend!
You can RSVP on facebook here >>>
Please feel free to share this email and invite others who might enjoy this time together.  All are welcome!
Blessings,
Sandie
Source post

This week we will have two speakers, maybe, maybe,  a third.

Greg Mathers will give testimony to the places the Lord has taken him
through the storms.

Shelle Griffith will give Testimony to the fact that God often begins
answering prayer before we even ask.

Praying for a speaker on Robert’s Rules of Order to attend as I think
they are good points to remember and I am one as you all know that
could use a little refreshing in this area. 🙂

Here are some points to ponder:

Seven Viruses that Infect the Church:

Are we already part of the persecuted church?

Have we abdicated the throne of our King?

Have A blessed week!!! Please let me know if you can come this
Thursday.  It is nice to get a head count. If you need directions we
will be meeting at Sandra’s. Please contact her or myself for
directions on your way that day.

Also, I am leaving this weeks prayer concerns in Gods hands. Asking
him that He will provide us with the right prayers at the right time
for all the right reasons.

PS  Joe Beffer will talk about Robert’s Rules of Order in practical terms for us also! Prayer answered.  And Sandra will update us on the OK-SAFE Moneybomb planned for July 4th and tell everyone how you can help spread the word.

LONANG is an acronym for the Laws of Nature and (of) Nature’s God, a phrase first used in the U.S. Declaration of Independence, 1776. The phrase is also a plural contraction; a somewhat shorthand way of saying “the law of nature and the law of nature’s God.”

But the concepts embodied in the phrase didn’t originate with Jefferson. The law of nature was a common term used by historic legal writers such as Grotius, Burlamaqui, Blackstone and others. The law of nature’s God, a lesser used term, was more commonly called the divine law, or the revealed law, meaning the laws of God revealed in verbal form. So what are these laws, and what can be known about them? This is our task . . .

• Constitutional Law
In search of the law of republican government

[Editor’s Note:  I suggest you bookmark this site for reference documents.  Read and study with family and friends.  This should be civics 101 in every household and in every school in the land.  Special thanks to Herbert W. Titus for his work on this project and through the years on matters of constitutional law.  Blessings/sc]

Posted by Sandra Crosnoe for Finding Gems & Sharing Them and OKGrassroots

Location: via skype (must be connected to sandiec99 and online at 8PM to join in the prayer time) 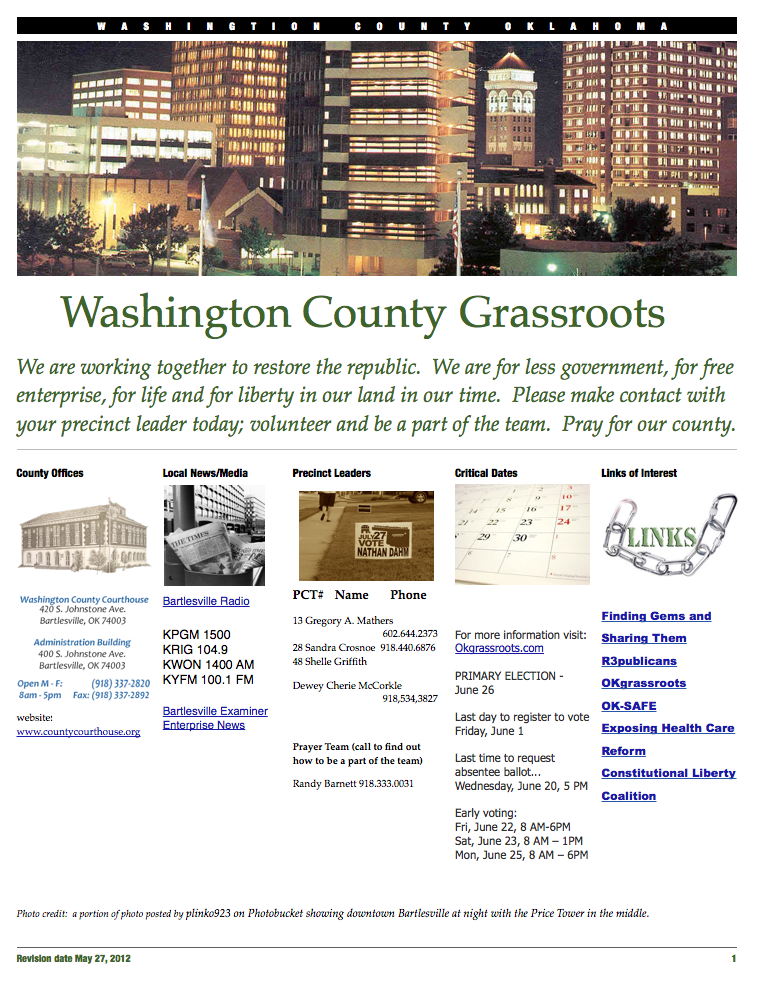