How We Treat People Really Does Matter

…Party Unity for Thee, but Not for Me

Unfortunately, the Washington County/District 1 leadership’s handling of an upcoming fundraiser in Dewey called me to point out that calls for “Party unity” must be consistent.  How we treat people matters – all of the time – not depending upon which faction is in or out of power.
On Jul 19, 2015, at 5:26 PM, Sandra Crosnoe wrote:

When I first received the letter below from Suzanne Callihan on behalf of Grace Farmer, I was stunned at the many levels of poor protocol and bad behavior for unity of the party embedded.  So I called Randy Brogdon our recently elected State Republican Party Chair to see if he had even been invited to the event. The answer was no he had not.  So I proceeded to write a note to Grace and see if she would correct the problems.  Here is a copy of my note sent on July 16th:

Grace,
In reviewing the press release, I find myself mystified at the breach of protocol in excluding our new Republican Party State Chair as one of your special guest speakers. When I first read it I hoped that Randy had been invited but declined. Unfortunately, when I called him today, he reported that he was not invited.
.
I would not like to think that Randy was purposefully excluded but it might very well be difficult for many people involved with the party to avoid drawing that conclusion, based on history. Considering that Party leadership should set an example and avoid all appearance of impropriety or personal conflicts of interest, it would seem that the obvious thing to do would be secure an appearance or attendance by Randy and send out an updated, corrected version of the release.
.
I do hope to hear from you within a day or two about corrective action on this so that I don’t find myself in an awkward position when I update my network about upcoming events and can send the corrected version.  I would also hope that the revised version would be sent to everyone that the original was sent to as well.
.

No apology note or corrected email has gone out so far to my knowledge.  I understand that now Randy Brodgon has had a phone call or message from Grace inviting him to or letting him know about the event.  Time will tell if he will be given the respect due the office or even if he will be able to attend the event due to this late notice.
Meanwhile I am asking all my Washington County friends to make sure that whatever they are giving the local party for the event below, please take time to be a Minuteman for the State Party.  It is easy and you can donate monthly or annually here >>> or click on pic below. 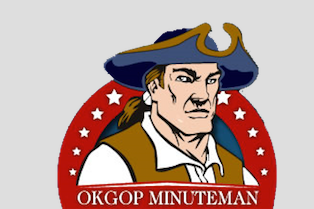 For Life and Liberty,

Begin forwarded message:
From: Suzanne Callihan <suzanne_callihan@sbcglobal.net>
Subject: Washington County Republican Party Fundraiser 8/1 at Dewey Fairgrounds
Date: July 13, 2015 at 10:05:32 PM CDT
Reply-To: Suzanne Callihan <suzanne_callihan@sbcglobal.net>
Washington County Republican Party Holding a Fundraiser on August 1
FOR IMMEDIATE RELEASE
JULY 13, 2015
The Washington County Republican Party will be holding a fundraiser on August 1, from 4:00pm to 6:00pm at the Washington County Fairgrounds in Dewey.  The casual BBQ dinner is open to the public, but attendees are encouraged to purchase tickets online ahead of the event.  Guest speakers include Bartlesville native and Oklahoma Labor Commissioner Mark Costello and Oklahoma Republican Party State vice Chair, Estella Hernandez.  Special guest, Jim Bridenstine who represents Oklahoma’s First District will also be in attendance.
Mark Costello, a fourth generation Oklahoman was born in Bartlesville and was first elected as Labor Commissioner in 2010.  Before being elected to office, Mark founded several companies, creating hundreds of jobs within Oklahoma.   Since being elected, he has fought in finding efficiencies within the Labor Commissioners office, saving taxpayers well over a half a million dollars.
Estela Hernandez has been married for 14 years and is the mother of 3 kids. Together, she and her husband own and operate a local construction company. She was elected Vice Chair of the Oklahoma Republican Party on April 11, 2015.  She is Chairman of the Community Engagement Committee for Oklahoma Federation of Republican Women.  She helped develop a successful community engagement program for OKC Republican Women’s Club and Oklahoma County GOP.  By attending monthly naturalization ceremonies, she is registering new citizens to vote and sharing with them the importance of civic engagement.
The mission of the Washington County Republican Party is to continue growth of the GOP at the grassroots level within Washington County through voter registration; education and helping Republican candidates get elected to offices.
The Fundraiser is from 4pm to 6pm on August 1.  Tickets are $30 and sponsorships are available.  A live auction will be hosted by State National Committeeman Steve Fair.  All proceeds help support the Washington County GOP activities including local candidate’s elections. Tickets can be purchase online by going to https://washingtoncountygop.eventbrite.com or by searching Washington County at Eventbrite.com.  For more information, contact Grace Farmer at 918- 440-4405.

All are welcome to come and meet Dave and get

an update on what is happening within the Republican Party. 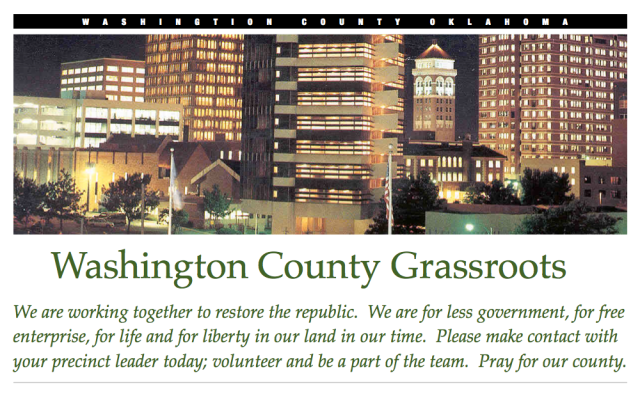 All are welcome to come and meet Dave and get

an update on what is happening within the Republican Party.