Will Grigg Was a Mighty Voice for Justice and Liberty — We Will All Miss Him!

William Norman Grigg died this afternoon. He was a journalist, broadcaster, editor, musician, father, husband, and self-described Christian Individualist. He was also my hero.

Will’s main beat was stories about individual victims of the state: particularly Americans who have been unjustly imprisoned or wrongfully assaulted by government officers. His research for each article was exhaustive. From his home in Idaho, he traveled all around the northwest to get the story in person. He would get to know each subject personally, and seek face-to-face interviews with their powerful persecutors. His tireless work has saved several innocent lives from being slowly drained away in prison. He wrote so many pieces about Christopher Tapp, a man who has spent two decades in prison for a murder he did not commit, that the Libertarian Institute, where he was managing editor, will publish a whole book collecting them.

Article written by Dan Sanchez who is Managing Editor of FEE.org. His writings are collected at DanSanchez.me. (Article dated April 12, 2017)

[Editor’s note: Will Grigg stood in the gap for all of us for many years. He will be greatly missed. My personal condolences to his family./sc]

The Floor Fight that Should Have Occurred in Tampa; Now the Curtain has been Peeled Back 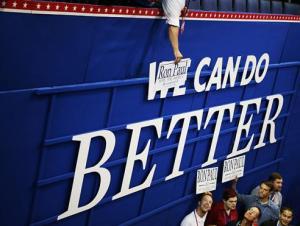 The stupid just doesn’t get any louder.  The person running for President really doesn’t need to be breaking rules, running roughshod over his own people and unseating whole delegations.  Nor should he even think about keeping minority reports from coming to the floor by disappearing chairmen and delaying convention buses arrival at the convention.  I cannot wait to see Morton Blackwell’s minority report and all about that bus ride to prevent us from hearing same.

Meanwhile Jeremy Blosser and the Grassroots team on the floor was doing everything possible to have a real convention and get a roll call vote, but the chair would hear none of that and ran roughshod over them and even booted the Maine Delegation.  If there is no such thing as rules and anyone can re-write them anytime, then we can all just ignore the party structure and get on with building the movement of ideas and limited government and finding ways to shut off the funding that allows some people to continue to try to milk the system.

It must be all in a paid political consultants’ days work when trying to make it look like all is well in Disneyworld.  Trouble is I wasn’t the only one who noticed this time.  It was glaring that there were cute blonde bouncy girls planted around the auditorium in little red dresses trying to get the crowd to look excited about the event.  There were signs passed out made to look like handmade signs that were so clearly NOT.  What hypocrisy.  Today, it is the talk of the town.  I wonder how one alienates the grassroots people and goes on to win the presidency?  If you want an event to be a coronation, then you at least have to make the serfs feel welcomed in the police state.

Did I mention stupidity overarching the doorway of the Republican Nation Convention?  Why would anyone except a lobbyist or someone looking for a consulting job even bother with the venue if we will be ignored at the mikes unless pre appointed for prime time viewing.  The real work of the Real Republicans is back home educating people about limited government and electing them to school boards and city councils and state houses and congressional offices where they can actually work to decrease government overhead and decline federal dollars with strings attached.  No Grassroots money should go to the RNC from henceforth and until grassroots principles are back in place and rules apply equally to all.

If we simply ignore the man behind the curtain, he will get bored with trying to act like he is in control of our lives when clearly he only makes matters worse and should be laughed out of town.

I hope we will discover the formula before we spend ourselves into third world status.

After this week, I remain skeptical that the RNC hierarchy of the Republican party will embrace the people or the philosophy and core principles of limited constitutional government when they have actually funded, utilized and endorsed the police state for their very own convention.  I do remain hopeful that the real grassroots people who believe in life and liberty and truly constitutional government are on the ground fighting in all fifty states and the territories too.  I know because I have met with many of them this week and shared information and promised to keep in touch.  To those I gave my card, I hope you read this and know that I salute your efforts and will continue mine!

May God be pleased to bless our efforts for Life and for Liberty in our Land in our Time!