InfoWars: Video Interview with Bev Harris of Black Box Voting and Election Fraud — Some Things You Can Do!

Bev Harris founded blackboxvoting.org in 2003, when she snooped around some trash cans outside of a voting station and found irregularities that proved the voting machines had been tampered with.  She made the “Hacking Democracy” documentary exposing how vulnerable the voting system is and how easy it is to manipulate. Lately she has discovered a new twist to the fraud where the voting machines can be manipulated remotely by one person and how Hillary Clinton is primed to use this vulnerability to sway votes in her favor.  This is the latest from her interview with Alex Jones:

Bev Harris of blackboxvoting.org gives Alex Jones the full details on how the elite are planning to steal the election.

h/t Toni Samanie for the find and the intro! 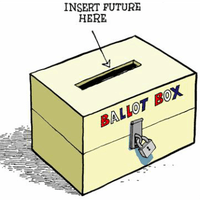 Finding Gems & Sharing Them – InfoWars: Video Interview with Bev Harris of Black Box Voting and Election Fraud — Some Things You Can Do!

Natural Law as a Restraint Against Tyranny

Video with Judge Andrew P. Napolitano recorded at the Mises Circle in Costa Mesa, California, 8 November 2014. This seminar examined the institutions of a stateless society and explored topics such as private defense, private police, privately produced money, the role of markets, and how stateless legal systems would work. This particular video in the series is about 22 minutes long and has over 47k viewers at time of posting.

Video shows Judge Napolitano at his best on natural rights. He stresses that you cannot take away natural rights with legislation even if you try because they do not come from government at all. He gives an interesting brief history lesson and then apples the concept to where we are today. He ends with a huge challenge to this generation and the next in a powerful prediction. Please take time to watch this. I promise you will be glad you did. Even if you already know these things, it will help you articulate the ideas to others and we all must do that!

Health Privacy Rights – Interview with Dr. Deborah Peel on America in the Balance

OK-SAFE, Inc.  recently had the opportunity to interview Dr. Deborah C. Peel, founder and Chair of Patient Privacy Rights, a non-profit organization formed in 2004 to promote patient privacy and the protection of personally identifiable health information.

Dr. Peel is also supporting the 2nd Annual International Summit on the Future of Health Privacy, to be held June 6-7, 2012 at the Georgetown Law Center in Washington, D.C.

This summit is free, and will be available via live-streaming if you cannot travel to D.C. for this important event.

Follow this link to the 3/14/12 America in the Balance interview:
http://www.truthinfocus.org/radio/america_in_the_balance.php

[Please note full archive of interviews available here for your listening pleasure at your convenience./sc]

Q & A: Ron Paul on Leaving the Episcopal Church, and Whether to Legislate Abortion, Narcotics, & Same-Sex Marriage
The congressman who won the Values Voters Summit straw poll tells CT that he believes marriage is a sacrament but laws cannot change morality.
Interview by Sarah Pulliam Bailey in Washington, D.C. | posted 10/10/2011 10:09AM
Related articles and links |

In his speech, Paul emphasized personal responsibility, using the example of Jesus’ response to prostitution. “He didn’t call for more laws. But he was very direct and thought that stoning was not the solution to the problem of prostitution,” he told the crowd. “So do laws take care of these things, or do we need a better understanding of our Christian values and our moral principles?” In an interview withChristianity Today following his speech, Paul explained why he doesn’t think the government can create morality.

[editorial note: I received this via an email from my friend Thom Holmes today.   He is in Oklahoma and he keeps me posted on Constitution Party events and I keep trying to get him to come join us in the Republican Party (for years to no avail so far). So we share and debate issues and work together where we can. Truth is we agree on more than we disagree! Looks like a great event – specially with Charles Key there!/sc]

There will be a great line-up of speakers including:

Also highlighting this conference will be the presentation of special awards, including two to a couple of very deserving Texans: Daniel New, who will be the recipient of the “Dan Hansen Independent American Award,” in honor of his work to oppose attacks on American sovereignty in general and the United Nations in particular; and his son, Michael New, an authentic American hero who, while in the military in the 90’s, refused Bill Clinton’s order to fight in the uniform of the United Nations, will be the recipient of the “Ed Frami Star Spangled Banner Award.”

Please join me in Forth Worth November 12 and 13!
[For further information concerning this meeting please visit:
www.constitutionparty.com/view_events.php]

I look forward to seeing you there!

Join Sandra Crosnoe and Shelli Dawdy on Blog Talk Radio this evening on The Constitutional Liberty Coalition Gets Grizzly as we discuss the status of the Sotomayor hearings in the Senate Judiciary Committee and consider a Strikeday proposal from Robert Drobot of San Jose.

Have a Tea Party “tale” to share or thoughts on Sotomayor confirmation?