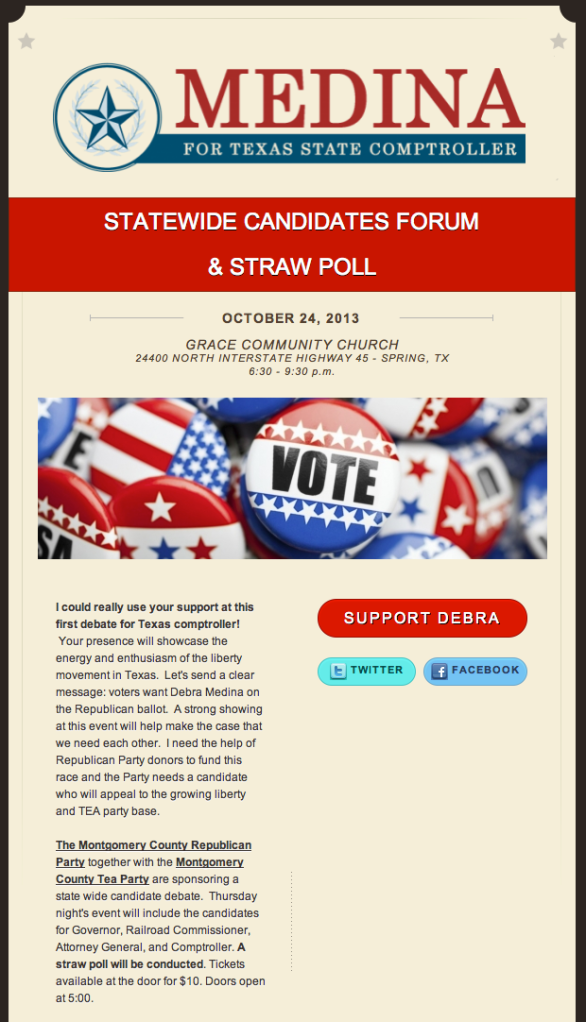 The Montgomery County Republican Party together with the Montgomery County Tea Party are sponsoring a state wide candidate debate. Thursday night’s event will include the candidates for Governor, Railroad Commissioner, Attorney General, and Comptroller. A straw poll will be conducted. Tickets available at the door for $10. Doors open at 5:00.

If you live in or around Spring, I hope we’ll see you Thursday evening. In any case, I hope you’ll share this invitation with friends and family who are in the area. Your support is much needed and appreciated.

I’ll work hard to earn your vote in Thursday night’s straw poll and again in the March 2014 Republican primary.

It does not seem at all far-fetched to think that Paul could have a much greater impact on the race than last time. The Republican primaries are sure to be about economic and size-of-government issues. The subject that hurt him last time, foreign policy, will probably take a backseat. Paul will not lack for resources, thanks to his legion of online donors. Reagan, the Republican hero, once endorsed him. And the party’s energy right now is at the grass roots, which also bodes well for him. If his economic message connects in Iowa and New Hampshire—well, who can say?

Meanwhile, the country is losing faith in its economic leaders. “I feel really good about what’s happening,” he told me. “I never dreamed of a day when so many people would be thinking about the Federal Reserve. I can draw crowds of thousands! The first time I mentioned Austrian economics when I spoke at the University of Michigan, they started to applaud. I thought, What in thunder is happening? What’s happening is, the education is occurring.”

Paul looked rapturous, and he leaned forward. “Two years ago,” he said, “if you’d had somebody come in and do what you should do on the recession, they’d probably be impeached in a week. But attitudes are changing—people are understanding economics differently.”