On Saturday, August 24, a group of over 60 liberty-minded individuals gathered on the back lawn of a local church in Tulsa, Oklahoma to celebrate the dedication of some of their local activists at the first annual Defenders of Liberty: Grassroots Activism Awards.

While this weekend we gave special recognition to but a few individuals, the efforts of all do not go unseen. Every sign planted, door knocked, cold call made, letter written to your representative, voter educated, idea communicated, and voice outspoken matters. This is a movement whose lifeblood is the individual, because it is one that finally recognizes that single entity’s power. This power is most feared by international bankers, power hungry politicians, corrupt lobbyists, and all their extensions of force. This power is called human energy; it cannot be controlled by those who seek control, but solely by the individual. This power can be temporarily stifled with taxes, regulations, oppression, starvation, torture, endless war, or even murder; but it cannot be stopped. The power to affect change is inherent in each and every one of us, each of you reading these words on the screen in front of you. You are a free and sovereign individual, whose duty is to claim the liberty that is rightfully his.

Today, we adorned our activists and community leaders with awards by the names of Lysander Spooner, Patrick Henry, and Samuel Adams; but one day, our descendants will be adorning their own heroes with awards named after the likes of Ryan Underwood, David Oldham, Amanda Teegarden and company. The ranks of the honored are but waiting for you, and as King Henry V so eloquently spoke in his Saint Crispin’s Day Speech:

We few, we happy few, we band of brothers;
For he to-day that sheds his blood with me
Shall be my brother; be he ne’er so vile,
This day shall gentle his condition;
And gentlemen in England now-a-bed
Shall think themselves accurs’d they were not here,
And hold their manhoods cheap whiles any speaks
That fought with us upon Saint Crispin’s day.

Believe me when I say that it has been an honor to strive so valiantly alongside these noble souls for the cause of Liberty, and I look forward to the many battles we have yet to fight, the new friendships that have yet to be formed, and the brushfires to be lit in hearts and minds. Continue to fight the good fight, never back down from your principles, and keep sharing your ideas; you just may be a future recipient of an award at the next Defenders of Liberty: Grassroots Activism Awards.

Peggy’s acceptance speech was short and sweet: “I wasn’t rebellious as a teenager so it’s only fitting I am as a 60-something year old lady.”

David Oldham is known for fearlessly speaking his mind at town hall meetings, even to the Mayor himself. 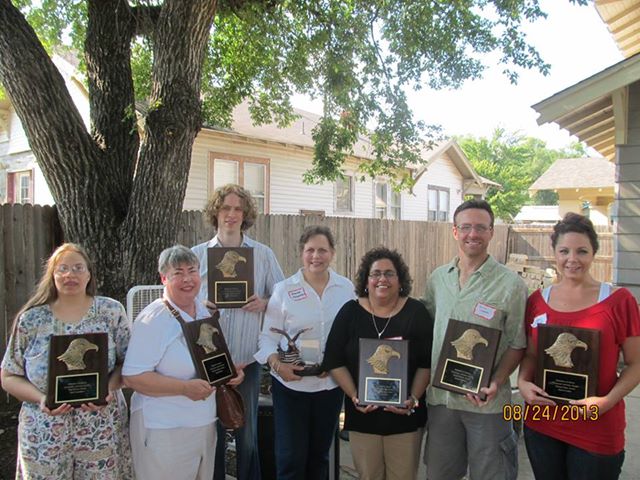 Congrats to all the winners and all those who helped!