Silver Lake Road Extension Eminent Domain Vote on Monday — Why? — Because We Can, But Should We?

Thanks to Sharon Hurst for the heads up on this, I plan to let my city councilman know my thoughts on the matter.  Hope you will do the same.  Here is Sharon’s email to me just received: 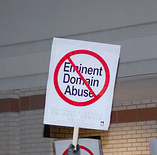 On Monday, the City Council will vote to exercise its power of eminent domain and take property from Evans Nursery in order to construct the Silver Lake Road extension.  I don’t know about you, but I find it extremely disturbing to see our city government using power to seize private property.   This is the kind of thing they do in Connecticut or California… not in Oklahoma!  Yes, we know there may be some rare instances when eminent domain is absolutely necessary.  But is this road really such a necessity that it requires the City take property from people who don’t want to sell?  I think any of us would be hard pressed to say it is.  Especially when we remember this has nothing to do with diversion of traffic and everything to do with easier access to Robinwood Soccer Fields.  Don’t forget — this Silver Lake Road extension was originally part of the 2007 Park Proposal.  I’m also curious… is it legal for the City to exercise its power of eminent domain over property outside the City limits?  Two parcels of land fall in Washington County — not within the City (or at least that’s the legal description from the Resolution in the City Council packet).

Let’s hope these City Council members, who have professed themselves to be such avid private property rights advocates, hold to their principles when it comes time to vote on Monday.  Why not send them an email or call them, and let them know what you think?  Or better still, come Monday night at 7pm and tell them in person.

Erin Tullos, eetullos@gmail.com, 918-213-4240  [However, I believe Erin is on extended maternity leave and no longer attending Council meetings. Is this true?]

The excerpt from the E-E article is reproduced below.

Steps to condemn property in the path of the Silver Lake Road extension are expected to be taken by the Bartlesville City Council during a 7 p.m. meeting Monday.

According to a resolution that the council will consider during the meeting, employees and agents of the City of Bartlesville have been unable to acquire certain tracts of land necessary for the construction of the roadway extension — between Frank Phillips Boulevard and Tuxedo Boulevard.

City of Bartlesville Director of Engineering Terry Lauritsen said Friday that the land to be considered for condemnation is located on the very north end of where Beck Drive ties into Tuxedo Boulevard. He said the city is looking to square up where the road ties into Tuxedo to make it more perpendicular to Tuxedo.

If approved, the resolution states that because the land cannot be acquired by negotiation or purchased at Fair Market Value, the city attorney is authorized and directed to institute necessary legal proceedings to acquire the rights, title and interest to the land “by the exercise of the power of eminent domain and to take such further action as may be convenient or necessary to acquire the identified property interest.”

The resolution also states that an emergency will be declared to preserve the public peace, health and safety “by reason of which this resolution shall be in full force and effective immediately from and after its adoption by the council and approval by the mayor.”