Ron Paul Liberty Report: The Pivot Back to Liberty

Oh I long for the day when the lamb will lie down with the lion, but we are not there yet! Here is a look at history from the perspective of before the age of American imperialism to now. I found the article to be insightful and hope you do to! Blessings/sc

The Pivot Back to Liberty

Sincere advocates of liberty need to travel a tough and rugged path. Surrounded by the darkness of empire and its draconian reach into all aspects of our lives, champions of liberty must keep their eyes on the prize without becoming despondent.

This can be challenging in a society that has come to rely so heavily on the state. The ideas of liberty are hardly ever considered an option. Often they’re even frowned upon.

How does one deal with such a situation? Once you understand the principles of liberty, you can’t just give up on them and pretend they don’t exist. So how does one grapple with times that are so deleterious to liberty?

The easiest way is to contemplate the big picture. If there’s one thing about life, it’s that it hardly ever moves in one direction for very long. Pivots and reversals regularly occur and often when they’re least expected.

In fact, prior to the formation of the American empire, it was the warmongers themselves who were despondent. They were the ones who had to live with the reality that their ideas were not an option.

It’s hard to imagine, isn’t it?

Sharing via Finding Gems & Sharing Them – Ron Paul Liberty Report: The Pivot Back to Liberty

Michael Snyder: The 70 Nations That Will Meet In Paris On January 15th Are Going To Publicly Commit To Dividing The Land Of Israel

A draft of the summary statement that will be released at the conclusion of the 70 nation conference in Paris on Sunday has been leaked.  As you will see below, this communique is going to call for the division of the land of Israel, for the establishment of a Palestinian state, for the 1967 borders to serve as the basis for final negotiations between the Israelis and the Palestinians, and for the condemnation of any officials that refuse to support a two state solution.  Of course this comes on the heels of UN Security Council Resolution 2334, which many believe represented America’s greatest betrayal of Israel.  Israeli government officials are publicly warning that there is a possibility that the principles agreed upon at this conference may form the basis for another Security Council resolution before January 20th, and this is something that we should all be watching for very closely.

Editor’s note:  It is definitely time to pray!

In those days and at that time, when I restore the fortunes of Judah and Jerusalem, I will gather all the nations, and bring them down to the Valley of Jehoshaphat. I will enter into judgment with them there regarding My people and My heritage Israel, whom they have scattered among the nations; they have also divided up My land.

Eye to Eye: Facing the Consequences of Dividing Israel

Finding Gems & Sharing Them – Michael Snyder: The 70 Nations That Will Meet In Paris On January 15th Are Going To Publicly Commit To Dividing The Land Of Israel

A Question for the Offended: Remedy for a Crisis — Clinton, Trump or ? 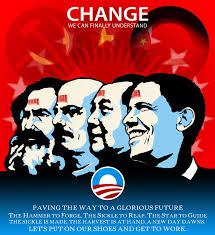 The moderate Mitt ROMNEY,  Vulture Capitalist,  vs.  Barry Soetoro-Obama,  the flashy subversive Socialist, a closet Muslim (and who knows what else).

Although Texas Congressman Ron Paul energized the Republican Liberty movement by packing hundreds of arenas with millions of young, enthusiastic supporters, the US Corporate Media assisted the neo-Conservative  cabal of Bush-Rove-Romney in splitting the vote from one primary to the next, covering up the subterfuge, and squandering this vital new wave of potential  life-long Republican advocates and reformers. 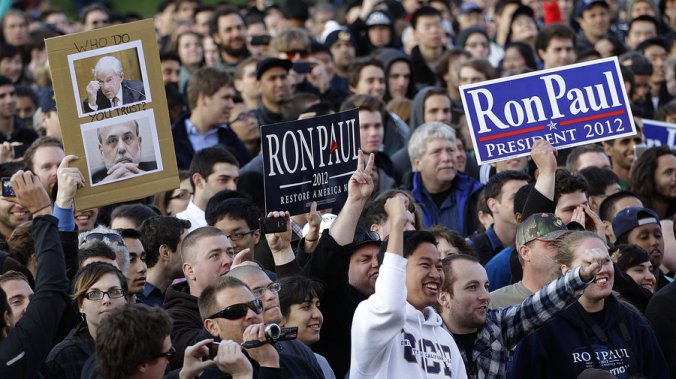 Who can forget the betrayal of the Bush-Rove-RNC’s  engineering of the nomination of Mitt Romney through dirty deals from Iowa all the way to Tampa?

Who can forget Romney throwing the fight by losing 2 of 3 debates?   Did Mitt take a dive for Barak Hussein Obama, and the espionage operation known as the Clinton Global Initiative?  Did the Bush-banker crime cartel place him there to ensure the New World Order, declared by George H.W. Bush on  9/ 11/ 1990, would prevail ?

BUT THIS Year a champion arose to take on the US Corporate Media complex and bust down their electronic Berlin Wall of distraction, diversion, and political correctness.

The American people rallied to the sound of a Trump.  We watched  a street brawler  emerge from the GOP pack as the standard bearer for a return to the America First battle cry of the Reagan years. 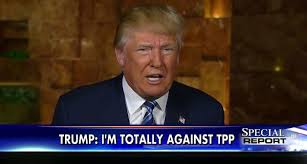 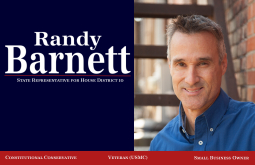 About the Author: Randy was born and raised in Bartlesville, Oklahoma. He is a graduate from OSU with double major in Economics and Political Science. He served his country with United States Marine Corps where served as a pilot & Intel Officer. After the military Randy earned a Master of Arts degree in Public Policy at Regent University. He is currently the tri-county coordinator for Oath keepers, a member of Gunowners of America, and OK2A.

Guide to Understanding the Middle East

The Middle East, explained in one (sort of terrifying) chart
By Max Fisher

What could be simpler than the Middle East? A well-known Egyptian blogger who writes under the pseudonym The Big Pharaoh put together this chart laying out the region’s rivalries and alliances. He’s kindly granted me permission to post it, so that Americans might better understand the region. The joke is that it’s not a joke; this is actually pretty accurate. 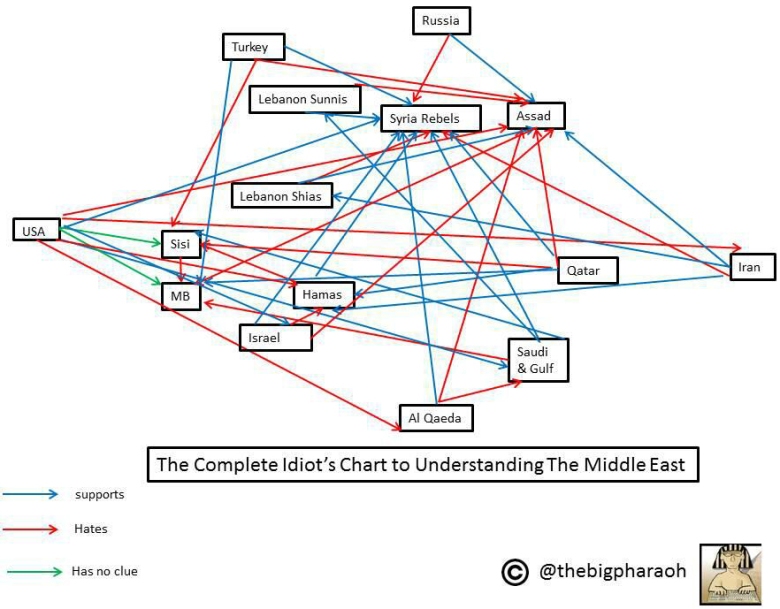 [Editor’s note:  It came from the Washington Post.  It must be true…]

Amendment Curtailing the NSA Fails in the House

An important update with details on some of the amendments offered. Please keep up the pressure to cut back government significantly. If we reduce spending NOW, maybe the nation can survive…

OK-SAFE, Inc. – On Wednesday, July 24, 2013 the U.S. House failed to pass an amendment to the 2014 Defense funding bill that would have ensured none of the funds could be used by the National Security Agency (NSA) to “collect records, including telephone call records that pertain to persons who are not subject to an investigation under Section 215” of the Patriot Act.

The Amash amendment (Amendment #100) to the Department of Defense Appropriations Act of 2014 was defeated on Wednesday July 24th by a vote of 205-217.

Living in a borderless “global economy” means the end of everything, as we once knew it – nation, law, and boundaries.  Those boundaries are not just those within and around a country, state, institution or agency, but personal boundaries…

Syria NOT Our War

Join us in opposing US military intervention in Syria

“We don’t want no war no more

Bring our boys home to our shores

Or the Bilderberg group that pays for it” ~ Amiee Allen

Meet the Rothschild Family and take a Trip Through Banking History!

Our world view affects how we react to current events, and news. The people that believe government can fix most of our problems believe that if we just get the right people in key government positions then they will enact laws to benefit the American Citizens.

The “left” believe that if they get someone compassionate enough in then the wealth of our nation can be diverted to help the needy and poor.

Many on the “right” believe that if we get the right people in power then our government will keep us safe.

On the other hand, what if our system became rigged so that whatever we do or whoever we vote for we can never swing our country around to go in the right direction?

What if this could be done without the knowledge of the average citizen?

English: Illustration of wikipedia:Mayer Amschel Rothschild, from The Jewish Encyclopedia, printed in 1907.

You may ask how could that ever happen? Wouldn’t it take an enormous amount of money?

Wouldn’t it take a lot of time?

Wouldn’t it take an extreme amount of cunning? Let’s read about one dynasty, the Rothschild’s, and see if it would be possible?

The History of the House of Rothschild

http://www.iamthewitness.com/DarylBradfordSmith_Rothschild.htm
an exhaustive timeline and references and more resources!

Now take a look from a biblical perspective.

Have you ever wondered whom, Revelation, Chapter 2, Verse 9 is speaking to:”I know thy works, and tribulation and poverty, (but thou art rich) and I know the blasphemy of them which say they are Jews, and are not, but are the synagogue of Satan.”

Could it be the blood line of one family who claims to be “Jewish” is who this verse is speaking to?

Have you ever heard of an Ashkenazi Jew?  What is a Zionist? What is Judaism?
Could it be that one family from the area of Georgia has carried out through generations an Anti-Christ Hierarchy that would astound you?  Would you believe that they had secret children to place in power? Would it surprise you to know that some of their secret children may have become rulers of the world throughout history?
.
If you want more information, here are some additional links:

Genealogy of the Rothschild family – Wikipedia, the free encyclopedia
A Summary of the Book “The Shadows of Power” — News of Interest.TV
Activist Post: G. Edward Griffin: The Rothschild Formula
[Special thanks to Greg and Shelle for their help on this post]

Posted by Sandra Crosnoe for Finding Gems & Sharing Them and OKGrassroots