Pick Pockets not just at state level – busy in Bartlesville too! Vote No March 6th 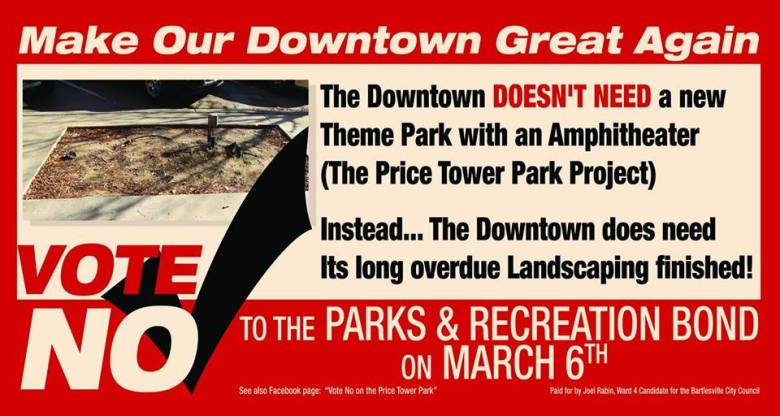 Well let’s just say, I have my yard sign up!

Instead…  The Downtown does need its long overdue landscaping finished!

Vote No to the Parks & Recreation Bond on March 6th

Finding Gems & Sharing Them – Pick Pockets not just at state level – busy in Bartlesville too! Vote No March 6th

Still having the wrong conversation — Cut the spending! 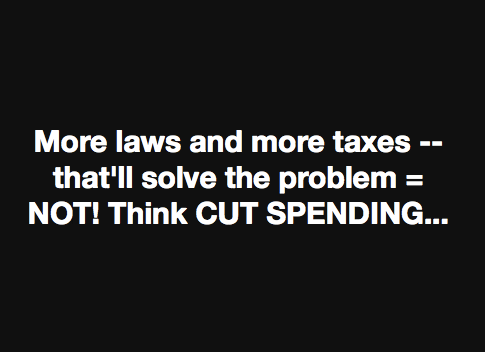 that’ll solve the problem = NOT!

Earlier this year, I did a post on this topic and it seems to deserve a repeat because we are still not having the right conversation!  From February 2017 (here and below)

Color me livid.  We have lost before we even get started if we don’t correct this matter.

Let me see if I can show you  how this game actually works.

Case 1:  I say lets cut taxes 20%  and you come back with how about 10% and we settle on 15%.  You think you won because we cut taxes a little.  Spending wasn’t reduced one iota in this scenario!  The revenue will have to be raised somehow by this generation or the next.

Case 2:  What if the opening gambit had been let’s cut spending 20% and you come back with how about 10% and we settle on 15%.  In this scenario we both won and spending was actually reduced a little right here and now.

Do you see the difference?  Please think about it.  Shift the conversation.  Talking about taxes is a trap and you loose no matter what the compromise position is.  Here’s a sample letter if it helps you get started:

I don’t want to hear another word about taxes.

Not one single solitary word.

Don’t even think about raising them – not on me and not on my neighbors either!

Don’t come to any of us asking for more money.  We are united on this matter.

You already have plenty.

You simply have not learned to prioritize correctly.

It is really pretty easy.

Do not spend more money than you have.  Do not ask me for more.

Let’s see how much government we can cut before anyone (not on the payroll actually misses any of it).

Thank you for getting our spending priorities in order and balancing our budget.  It is after all what we elected you to do.

By the numbers: Winners and losers of Oklahoma’s proposed budget

Finding Gems & Sharing Them – We Are Seriously Not Having the Right Conversation! It is the Spending Stupid

Finding Gems & Sharing Them – We are still having the wrong conversation — Cut the spending! (updated with new graphic meme from Facebook)

President Trump on Budget & Spending Cuts along with the Mulvaney Appointment – a real win for the Taxpayer!

Trump says a lot in a few words  “We must do a lot more with less”  Hiring freezes are already in place and he is working on a cabinet that knows how to manage wisely.  All this bodes well for the overworked American taxpayer.

“Part of the job is saying ‘no,'” Mulvaney told The Post and Courier on Friday, less than 24 hours after being sworn in as the new Director of the Office of Management and Budget.

Read more here:  http://www.postandcourier.com/news/mick-mulvaney-says-he-s-about-to-become-the-most/article_4c41fbb0-f560-11e6-a987-7b7ca7088149.html  It is worth noting that had Rand Paul become President, Mulvaney would have been his selection for this job as well.

h/t Joshua Lock for the links

Finding Gems & Sharing Them – President Trump on Budget & Spending Cuts along with the Mulvaney Appointment – a real win for the Taxpayer!

Drain the Swamp by John Stossel 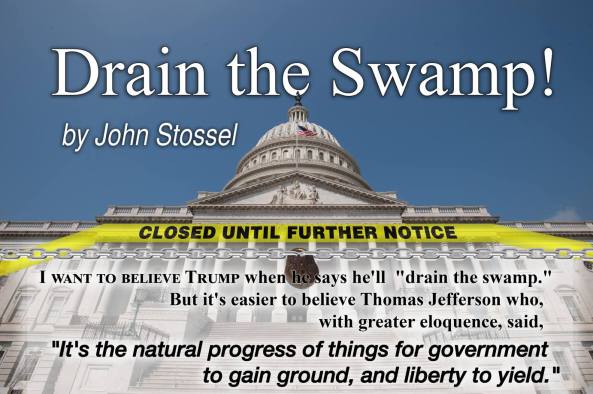 Drain the Swamp!
by John Stossel

President-elect Trump says he’s uniquely qualified to “drain the swamp” in Washington, D.C. He can do it, he said at one debate, because as a businessman, he understands American cronyism. “With Hillary Clinton, I said, ‘Be at my wedding,’ and she came to my wedding. You know why? She had no choice because I gave.”

He said that’s why he gives money to politicians from both parties. “When they call, I give. And when I need something from them two years later, three years later, I call them. They are there for me!”

That’s crony capitalism. Ideally, laws are applied equally; no one gets a special break because he gives money. But today’s complex government allows the politically connected to corrupt … most everything.

Even parts of the government swamp designed to protect consumers, like Dodd-Frank banking rules, get corrupted. Banks watch little changes in rules far more closely than you ever will. Then they exploit them. Bank lobbyists make money off complex laws like Dodd-Frank. They fight tooth and nail to keep them, not abolish them.

Congress recently almost got rid of one obvious example of crony capitalism, the Export-Import Bank. To encourage exports of American products, bureaucrats give loans to Boeing and other big companies.

Some principled Republicans tried to eliminate this corporate welfare, but Ex-Im loans were voted back in during the final hours of budget negotiations.

Businesses in cozy relationships with government don’t die either. Jeff Deist, president of the free-market Mises Institute, says when the housing bubble burst, banks should have been allowed to fail and put through “the bankruptcy and liquidation process.”

CARTOONS | JERRY HOLBERT
VIEW CARTOON
Investors would have lost big, but that’s OK, says Deist. “That’s the difference between free-market capitalism and state capitalism. With state capitalism, there are upsides for the parties involved — but no downsides.”

In the swamp, no one but taxpayers pays for their mistakes.

Politicians routinely promise to change this culture, but once they get to D.C., they lose interest, says Trump.

“They go to Washington, something happens – they become weak. … I promise this is not going to happen to me.”

I want to believe him. But even if he were an utterly principled man — and I await evidence of that — it’s tough to constantly say “no” to people.

When you’re in Congress, people ask you for money all day. “I need a grant for my charity — we do so much good!” “My business needs a subsidy/protective tariff — we employ so many people — in your state!” So it goes, week after week.

Few people bother to go to Washington to ask for spending cuts. Even though America is heading toward bankruptcy, 90 percent of congressional testimony comes from people who want more stuff.

Politicians’ cronies get more stuff. Solyndra got half a billion dollars from President Obama. The company went bankrupt, which shouldn’t be a surprise. Government has no way of knowing which ideas will succeed.

But it’s well worth it for companies to invest in lobbyists and fixers who dive into the swamp to extract subsidies.

For taxpayers? Not so much. While the benefits to lobbyists are concentrated, taxpayer costs are diffuse. Solyndra cost each of us a couple bucks. Will you go to Washington to pester your congressman about that? Probably not.

I want to believe Trump when he says he’ll “drain the swamp.” But it’s easier to believe Thomas Jefferson who, with greater eloquence, said, “It’s the natural progress of things for government to gain ground, and liberty to yield.”

Draining the swamp would mean not just taking freebies away from corporations — or needy citizens — but eliminating complex handouts like Obamacare. Candidate Trump said he would repeal Obamacare. Will he? He’s already backed off of that promise, saying he likes two parts of the law — the most expensive parts.

Every word in the register of federal regulations and laws has a special friend, a lobbyist (or 20) who will defend it, fight hard to make sure everything stays the same.

But I won’t count on it.

How Can We Trust Them with More Money$$