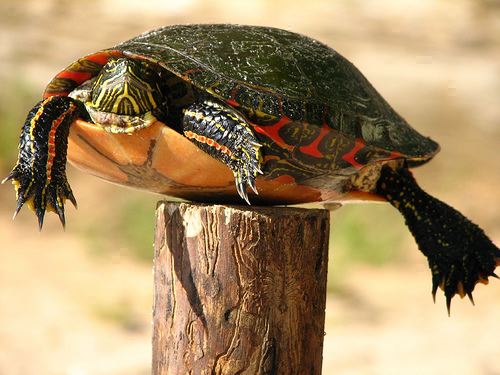 While suturing a cut on the hand of a 75 year old farmer, who’s hand was caught in the gate while working cattle, the doctor struck up a conversation with the old man.  Eventually, the topic got around to Obama and Presidency.

Not being familiar with the term, the doctor asked him what a ‘post turtle’ was.

The old rancher said “When you’re driving down a country road, and you come across a fence post with a turtle balanced on top – that’s a post turtle.”   The old rancher saw the puzzled look on the Doctor’s face, so he continued to explain.

“You know he didn’t get up there by himself, he doesn’t belong up there, he doesn’t know what to do while he’s up there, and you just wonder what kind of dumb ass put him there to begin with.   All ya really know is ya gotta help take him down …”

Special thanks to Charles Gove from an email in 2010

« OK GOP Invitation to Join the Party — April 20th in OKC
Teegarden for OK GOP State Chair Announces Candidacy at OCPAC — Decision will be made April 20th at the State Convention in OKC »
Loading Comments...
%d bloggers like this: